As time progresses, new technologies continue to reshape the retail and logistics industry. Multi-channel retailing and ever-increasing customer demands are forcing retailers to make significant investments in technology. As retailers are usually not technically savvy, they look at partners to help them with the necessary tools, infrastructure and technological capabilities in order to fulfill business operational needs. This paper describes the pre-Android rugged handheld landscape, where Windows-based rugged devices were the market leaders, followed by a period of platform fragmentation and proprietary development, resulting in the growth of Google Android platform since 2013, which tremendously impacted the rugged device space. The paper also looks at the way companies approach enterprise mobility related investments.

It’s been almost two decades since retail companies started using ruggedized handheld computers and rugged PDAs as point-of-sale, inventory management and customer shopping solutions. Most of these handheld computers were based on Microsoft operating systems, either Windows CE or Windows Mobile (essentially a friendlier user interface on top of Windows CE). Most of these applications are still quite successful and are being used in the industry.

Around 2011, with the advancement in technology, the evolution of feature-rich Smartphones revolutionized the replacement of traditional PDA/Pocket PC by smartphones based on Apple's iOS or Google's Android operating system. Regardless of these developments, until 2007 virtually all rugged handhelds were still built on Windows platform.

While consumer electronics has been continuously changing since 2000, industrial handheld computers have had a much longer life cycle. Many models in use have remained almost unchanged for several years, with importance being emphasized on their ruggedness and convenience rather than fancy looks and features.

However, with the evolving technical landscape, new operating systems, security issues, increasing customer demands and market pressure, there is a change in the way how handhelds are being used, forcing the handheld OEMs to develop new products.

For many years now, most rugged devices that serviced the supply chain industry have run on a version of the Windows Embedded operating system. By 2013, it had more than 80 percent of the enterprise market. But, industry experts are now predicting a change within the next five years that will see companies using Windows based rugged devices shift to Android OS. This could prove to be one of the biggest industry platform shifts ever.

INTRODUCTION TO THE 'PARADIGM SHIFT'

By early 2012, the majority of ruggedized handhelds were still based on Windows CE or Windows Mobile. There were, however, isolated attempts at offering Android-based industrial handhelds, often in conjunction with making the same hardware available with Microsoft software. Microsoft's successor to Windows Mobile, Windows Phone, did not gain much traction and presence in handhelds, a situation undoubtedly cemented by Microsoft making it impossible to upgrade from Windows Mobile to Phone 7, and making Phone 8 incompatible even with its own Phone 7 and 7.5.

In 2013, it became increasingly clear that Android was considered a feasible alternative for rugged handhelds. Some manufacturers began offering Android versions of selected handhelds, often with the same or similar hardware as their Windows Mobile based products. Both Intermec and Motorola started building devices based on Android platforms. Also on the software side, cross-platform solutions such as RhoMobile and iFactr started fuelling easier transition by enabling apps that ran on multiple OS platforms.

By 2014 more new legacy handhelds with versions of Windows CE or Windows Embedded Handheld were launched, but there were at least a matching number of new Android-based handhelds developed by new device manufacturers.

Till 2015, most manufacturers of rugged handheld devices sold both Android and Windows devices. But , the majority still sold Windows Embedded Handheld 6.5, primarily due to the lack of a feasible alternative from Microsoft.

Some interesting trends captured were -

b) Rapidly increasing display sizes to meet the demands of customers used to giant smartphone screens.

In 2017- Windows 10 IoT versions started gaining traction. But due to its extensive features, there is a steady increase in demand for Android based mobile devices. The Windows/Android battle for industrial and vertical markets has now tilted quite decisively in Android's favor.

Also the evolution of HTML 5, allowed effective cross-platform application development so that is not locked to a specific mobile OS. With HTML5, companies can support different devices for different  uses on the same application, without having to worry about device interoperability. In addition to the cross-platform functionality, HTML5 also lets provides other enhancements, like smarter form controls, APIs, database support, faster processing, and memory.

Some new technologies like RFID, GPS, wireless radios, high quality imagers and scanners, sensor technology and integrated high-resolution cameras were also in demand. Though these features aren’t new, they are being utilized effectively only recently through integration into android based-handhelds.

Why is Windows Embedded Expected to Lose the Industry Race?

Windows Embedded CE version 6 first debuted in 2006 and managed to capture a large portion of the embedded device market. Later on, Windows Embedded Handheld 6.5 became the most successful mobile OS with Windows Embedded 7 and Windows Embedded 8 getting almost totally ignored. It is expected that the new Windows IoT will also probably face a similar reaction.

The fact that Windows Embedded Version 8 and above OS are incompatible with Version 7 and earlier makes it all the more difficult for enterprises to migrate to newer operating systems. Also, Windows Embedded 8 didn't offer support for all screen sizes and form factors, making it unsuitable for specialty devices. More importantly, chipset vendors stopped supporting Windows OS.

Microsoft’s announcement that it’s ending extended support for Windows Embedded 6 in in 2017 and Windows Embedded 7 in 2020 effectively puts an end to almost 2 decades of handheld device convenience. Going forward developers and device manufacturers will be required to rewrite their apps to a new operating system.

For any company, making the transition will come at a cost and will be time consuming. Especially in the retail sector, where dozens of specialty-device apps are used, the transition to become compatible with a newer version of Windows can include a cost worth millions of dollars. With such a huge investment, companies will be looking at ensuring that the new platform is not only comfortable to adopt but also has a strong future. As a result, many large retail enterprises like Home Depot have now moved on to Android. 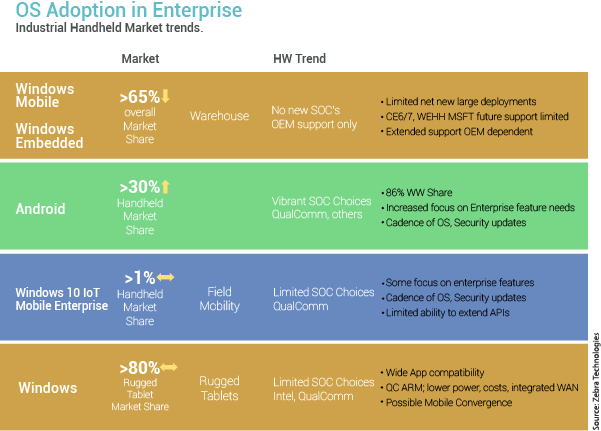 An interesting new development in rugged handheld category, which is driving Android preference, is the inclusion of increasingly sophisticated sensor technology. Motion sensors, pioneered in smartphones, can be used to automatically change display orientation, engage power conservation, or interact with applications. Light sensors can adjust screen brightness to save battery power. 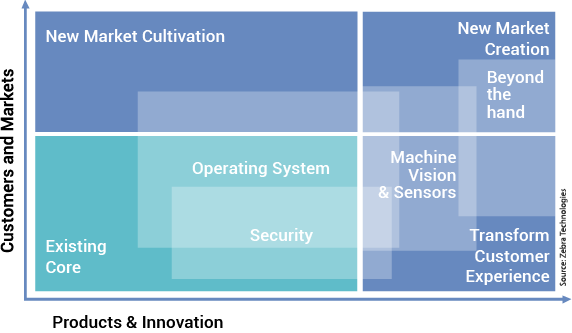 Some of the biggest market leaders offering rugged handhelds include Zebra, Honeywell, Intermec, Motorola and Datalogic.

Intermec was acquired by Honeywell in 2013. Honeywell is focusing on the development of cross platform Handheld Computers. The Honeywell CN75 and CN75e mobile computers provides the choice of a Windows or Android operating system on a single device to meet changing enterprise business demands.

While  Datalogic is committed to extend its support to Windows CE6/WEC 7 and Windows Embedded Handheld 6.5 (WEHH 6.5) till 2022, it has also started developing Android based mobile computers in 2015. It's DL-Axist™ PDA is a rugged full touch Enterprise Class PDA with Android technology and a brilliant display.

Zebra is the market leader in Enterprise mobile computing and has 42% rugged market share. It offers a wide range of handheld computers that cater to healthcare, mobile, logistics, and retail professionals, offering immediate access to business data in the field. Zebra’s strategy is to protect it’s customers’ legacy investment in windows based devices by extending support and have also started working on growing android portfolio. Zebra is also working on rugged tablets based on windows platform.

Zebra is seeing an increasing in demands for Android-based devices and there are plans to incorporate more Android tools into Zebra’s sales channel. 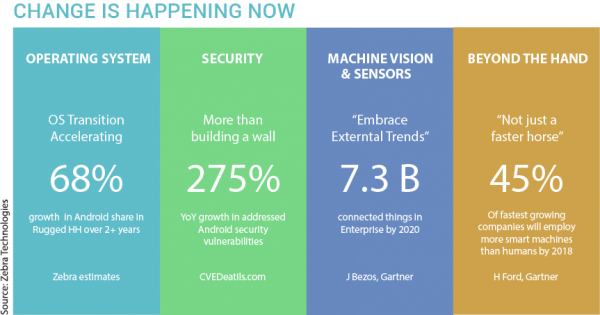 The rugged mobile computing industry is evolving to accommodate business demands for consumer friendly devices. For many years, almost all vertical, enterprise and industrial handhelds were running some version of Microsoft Windows. As more rugged device manufacturers are starting to adopt Android and other modern OS options, the devices have started offering features such as processing power and user interfaces that are similar to their consumer counterparts. Though end users, like retailers and transporters have the ability to leverage mobile investments for generating more complex business applications, it also serves as a wake up call for businesses who haven’t yet transitioned or made budget provisions for the possible investment in mobile computers due to OS shift.

While Windows 10 IoT Mobile Enterprise was theoretically the successor of the old Windows Mobile/Embedded Handheld, but due to the low adoption rate it did not penetrate the market. Some device developers feel that Android fragmentation is a barrier to user experience, a security risk, and a challenge for the developers, and this may leave a small door open for Windows to make a comeback. Also, device manufacturers are paving the path for next generation cross-platform devices, which provides stable, secure and feature-rich rugged mobile computers.